View complete article and photos via Scribd at https://www.scribd.com/doc/17416740/Bound-Lettered-Winter-2009

Copies if the issue available at: http://www.johnnealbooks.com/prod_detail_list/104

LIBERTIES ARE NOT GIVEN, THEY ARE TAKEN 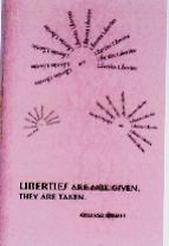 "Liberties are not given, they are taken by David Drum (Los Angeles, Burning Books Press, 2008, Ed. of 100, pink, black and blue, signed and dated by artist, $9.95) is a very appropriate visual poem about Freedom, as inspired by a quote from Aldous Huxley. The pages scream off the page–and yet are simple, beautifully executed, and powerful. If you love visual poetry, freedom, rights and privileges, and liberty, then this is the book to buy, give and return to it often." 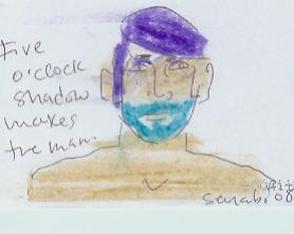 “Liberties are not given, they are taken” is literally the finest thing I’ve ever received through the mists of mail art.  Thanks so much.
-- Mete Sarabi, mail artist 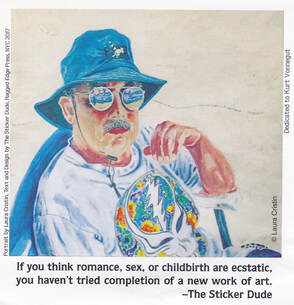 DAVID -- THANK YOU FOR THAT WONDERFUL "LIBERTIES"


THE STICKER DUDE
AKA Joel Cohen 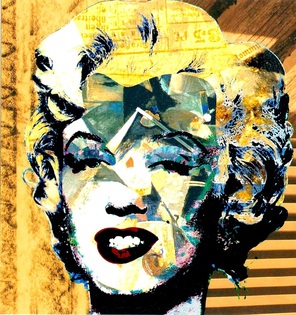 "Your book is AWESOME!" 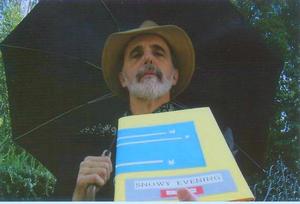 “I’ve been collecting the artist's books of David Drum for 15 years, and have always taken pleasure from their beauty, imaginativeness, aesthetic range and an amiable ambiguity which pulls me away from daily life to a soothing aesthetic contemplation.

"Whether black and white (Editions Noir) or richly multi-colored, whether text-based or purely visual, whether classics such as Robert Frost’s “Snowy Evening” (adorned, with sly humor, with a single miniature sleigh bell) or original works by Drum such as the vaguely ominous “Departure the Blue Train,” I return to these works time and again with a renewed sense of enjoyment.”

REVIEW OF FACADE, A BUNCH OF POEMS 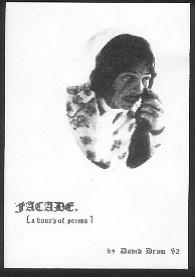 I first encountered David Drum’s poems in Alice Notley’s magazine Chicago, where they extravagantly stood out from the other contents.  I liked them a lot.  Michael Lally has recently published a small collection, FAÇADE, more or less making Drum available to all comers.  FAÇADE (A BUNCH OF POEMS) consists of 9 poems over 38 pages.  Though Drum works in narrative with subjects that don’t lend themselves to haiku, he’s admirably concise.

PROMETHEUS: THE POEM OF YOUTH is a mythological story about aspiration and defeat:

I will go to Athens and die, or collapse
I will go with dandelions.

THE BLUE TRAIN is a set piece: if these poems are generally episodes cinematically organized, it is only a few frames, but extremely busy ones.  When I say cinematic what I really mean is the impressionistic, prosaic method of describing mental landscapes through observation & responses thus evoked, like a movie novelisation.  GRAND CANYON SUITE is about a half-Indian jumping into the Grand Canyon.  The myth of the west runs through the poem like a headache, especially for the protagonist.  If GRAND CANYON SUITE derives from the western ETERNAL LIFE (OR, THE BRIDE OF JESUS) comes out of science fiction movies, as seen on TV.  Television narrative is another correlate to Drum’s method, especially in his use of small open field passages to bridge from one block of long lines to the next: a tumbling impression separating linear musics, the way straight line late show coexists with rapid flash commercials, each nurturing the other. TYPHOID MARY is a wonderful poem. On the last page are these lines:

You may think I’m writing this poem for you, this one here
And you are absolutely right if you have continued this far
Because poems are written for people with patience and eyes your color
And if you look close you can see me pulling the strings
There are strings everywhere why shouldn’t I pull a few with my hands

If you work in scope & narrative you can step out for an aside, which will show your skill & heart clear & true.

SOUTH is Gone With The Wind, as it were, completely different & as cynical & sentimental as the original in the space of 8 pages. (Vide on concision.)  I don’t mean that it has the same plot, but that it is the same story.  PORTRAIT V is not an epic, but a fairy (decadent, folk) tale, about Cinderella, gathering the faggots in the evening before the 3 wicked stepbrothers take their turns sharing the nookie, & her brief liaison with the Village Idiot.  THE ALCHEMIST is also a fairy tale & reminds me of some of the old cartoons I watched as a kid, as do a lot of Andre Breton’s poems.

The last poem, THE OLD CASTLE, OUI, is a personal address, the only one of its kind in the whole book, but still a “story.”  The recipient of the poem ends up in a German castle and so we pass from literature into romance, in the literary (not pejorative) sense of the word.

Drum’s poems are different in scale & purpose from most other poems produced today; he seems to be working at bringing “epic” & “narrative” back into common or current usage. Scale determines his repertoire of effects & images and forces some of his sentimentality upon him.  The more one puts in (in a small space) the simpler one’s diction & images need to be.  Drum’s colors are primary.  The most common is white, not a color.  His poems are generally melancholic in tone & have a prosy wit that mitigates the sentimental.  Maybe only a comic epic is possible these days.

His poems are quite funny & reminiscent of the lighter works of such noted academics as Howard Nemerov (whose LOT LATER comes to mind) or Reed Whitemore.  This isn’t a putdown (I like to read that kind of poem) but rather a reminder of who has been working this field most recently, before persons such as Drum began chopping cane.  The best is, of course, Kenneth Koch, long may he wave.

Along with Koch in The Art of Love and Richard Snow in The Funny Place, Drum is reacquiring territory from the academics & the past & shows signs of producing an interesting and original body of work which may well prove to be as necessary an oeuvre as that of any young poet today.  I recommend him to your judgment, which will be just.